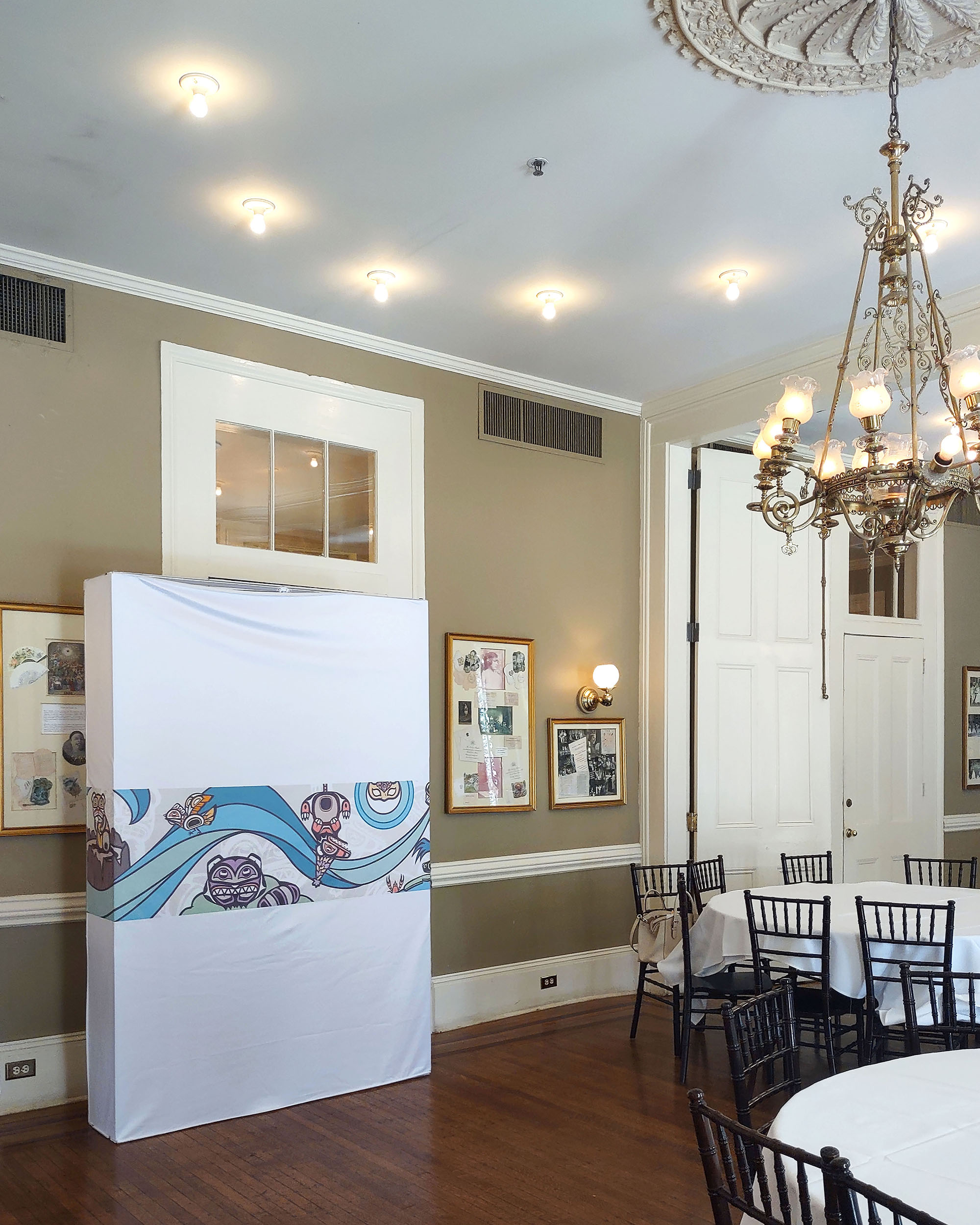 If you follow me on any of my social media accounts you may have seen that I designed a mural for New Orleans! It was such an honour to be a part of this project. I designed this mural “Connections” which was then painted by Louisiana artist JoLean Barkley. The project was put together by the Consulate General of Canada, the Office of New Orleans Mayor LaToya Cantrell, and the Arts Council of New Orleans. Being able to go down to celebrate the unveiling in April of this year and see it in person was surreal. This project has been in the works for 2 years and I was brought on to the project 10 months before its completion. When I got the email inquiring if I would be interested in designing this huge mural I honestly thought it was too good to be true! The header image is a cleaned-up version of the final concept art for the mural, it went through a couple of different phases, originally sporting the animals in an illustrated swamp and then moving more in the abstract direction featuring the animals surrounded by “flowing water” that runs the length of the wall. The moose was a last-minute addition to extend the mural farther on the wall, I was actually illustrating the addition while JoLean Barkley had already begun painting.
Mural Description:
This mural uses abstract blue and green tones to depict the reliance of both Canadians and New Orleanians connection with water. The left side of the mural showcases Canadian wildlife in contemporary Northwest coast formline designs and as river flows “downstream” towards the right side transitions to Louisiana-based wildlife, depicting the journey and discovery of new creatures on the Acadians’ journey South. The opossum (Canada’s only marsupial) is also found in Louisiana and its location within the center of the mural proves a connection between both locations. The opossum’s traditional Cajun Mardi Gras hat indicates the sharing of culture and traditions between the two communities. The white creature silhouettes in the background give a sense of history and continuity, as echoes of the past drive traditions of the present. The river ends and transitions into the Loup Garou, a creature known in Laurentian French communities but also prominently featured in Cajun Folklore as a symbol of the stories and connections our communities share.
– Lindsay Glatz
There are so many people to thank for being involved and making this happen. Thank you to Mayor Latoya Cantrell, Mayor of New Orleans, Consul General of Canada, Dr. Rachel McCormick, Joycelyn Reynolds, Executive Director -Arts Council New Orleans, Lindsay Glatz, Creative Director – Arts Council New Orleans who coordinated the creation of the mural, liaison with artists, and author of mural description. Rosine Pema Sanga – Director of International Relations, City of New Orleans who had a key role in ensuring the proposal was approved, and Noella De Maina – Consul, Foreign Policy and Public Affairs who came up with the idea and spearheaded the project! Thank you JoLean Barkley for taking on the huge role of painting my design, she did such a wonderful job and she painted it so fast I was blown away. Thank you to my Mom for making the trip with me, it was so special to share this with you. 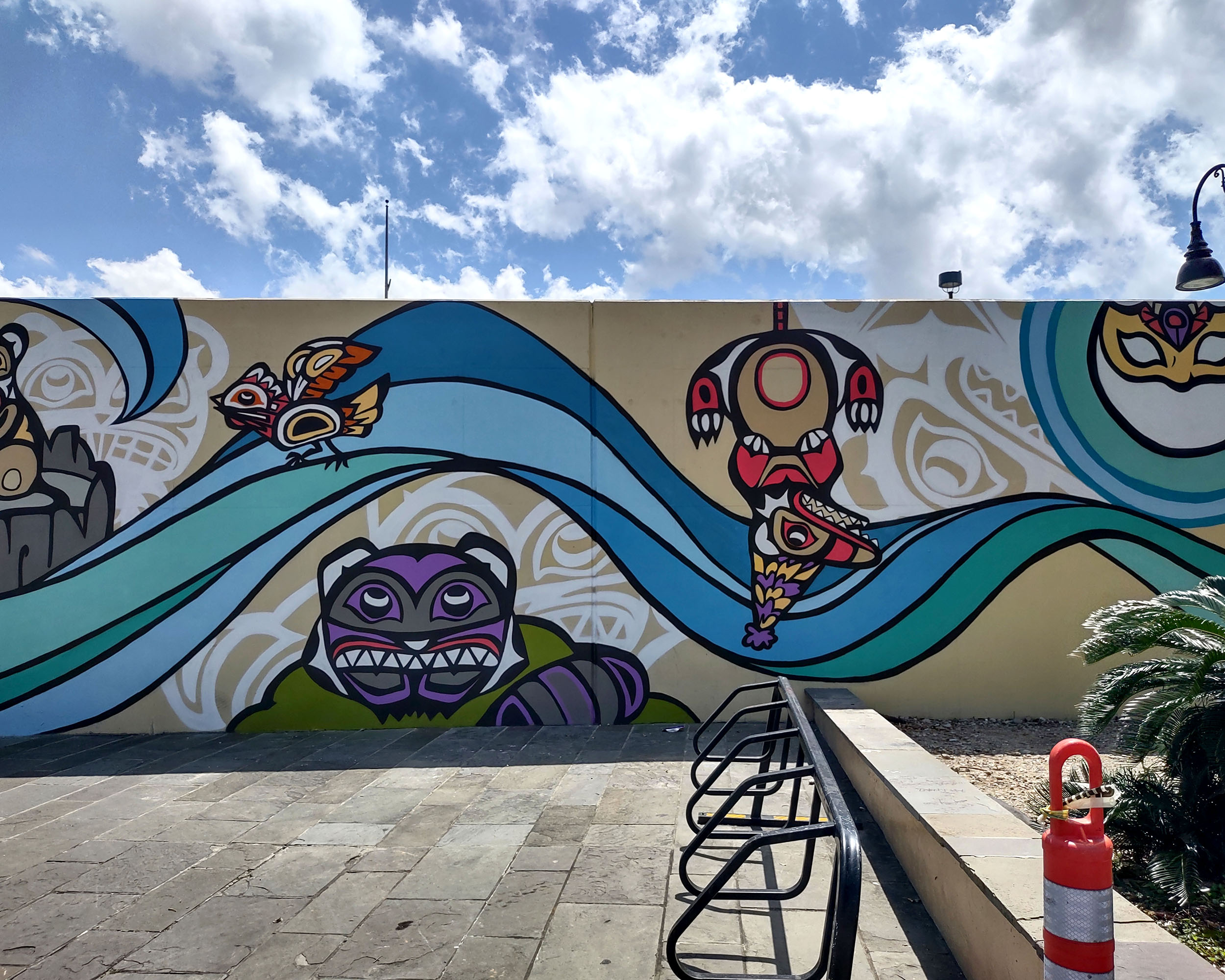 After the ribbon-cutting ceremony, we headed over to Antoine’s Restaurant for a cocktail hour. It was a beautiful reception, I met wonderful people throughout this whole event, the food and drink were delicious, lots of photos were had, speeches were made, and they even printed my digital illustration of the mural out on a backdrop as well as some cute cards which was a nice surprise! (Minus our moose friend, he was a very last-minute addition, a meant-to-be addition mind you) I was also interviewed on their local news with Consul General of Canada, Dr. Rachel McCormick! I’m still processing how incredible this opportunity was and how lucky I am to have been a part of this, I’m so thankful. It’s amazing to have such a connection to New Orleans.

Fun fact, I was in Disneyland when Princess and the Frog was released and I was able to see the movie in Downtown Disney as well as participate in Disney’s version of Mardi Gras with my family. We were given costumes from the cast and we performed on the Mark Twain, the cast members taught us our dance moves and everything! Now all these years later I went to NOLA, my artwork is there and I got to experience the culture first hand. I’ll always have a special place in my heart for the Big Easy.

Check out my PRESS page to see some articles about the mural!